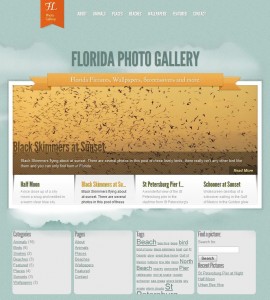 View the new version of the Florida Photo Gallery

The oldest of my websites that is still live is Florida Photo Gallery.  Photography has long been a passion of mine and this website used to be a source of pride for me.  The photos there were always nice, and the web site itself used to be  a thing of beauty and a showcase of cutting edge HTML and CSS technology.  It was one of the first wave of websites to use CSS to create “rollover buttons” that used CSS instead of images to create the rollover effect and it also had an ingenious but fast script that detected your monitor size and served a background image of a size based on the size of your monitor.  The latter was a forefather of todays  Responsive Design technology in fact.

The new version of the website isn’t groundbreaking in any way, but it does use several cutting edge technologies which provides several features for us and the user: